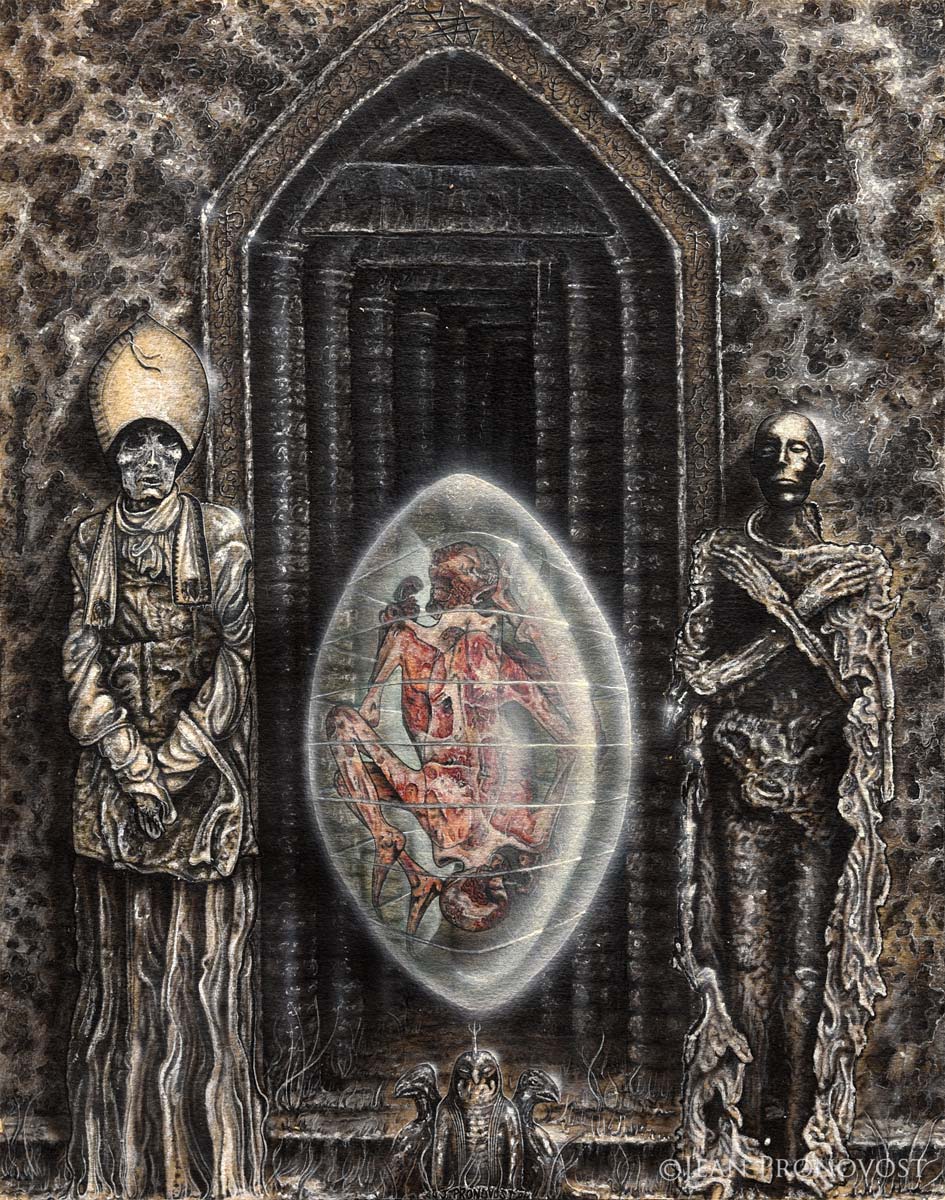 This series of eerie and mystical paintings are inspired by H. P. Lovecraft. The Dho-Hna Formula is a magic spell found in both the Dunwich Horror and the Necronomicon. It is an incantation that is part of the Cthulhu mythology, it opens the gate and summons the cosmic entity and great old god, Yog-Sothoth. What lies beyond the gate is an enigma. Like this piece of Lovecraft fiction, these paintings have magical themes of metamorphosis, a surreal mix of reality and imagination, and a blurring of past, present, and future

The first painting in the series transports us to a magical afterlife scene, where we see the links between life and death. There are three mummies here, with a South American aesthetic. The two sitting on the rocky ground to the left and right of the abyss feel almost alive, and one of them is talking.

In the center of the painting is a female mummy, she wears a sculpted mask and has some remnants of body wrapping that sparkle like precious stones. She is talking to us, saying something beyond the measure of time and space that we cannot understand. The line of composition is triangular, and so our eyes are drawn to her, and she carries the emphasis. She bears an eerie, glowing egg that holds a larva or primitive form of life. In the background is an ethereal, swirling vortex sky: it is a passage between the land of the living and the land of the dead. 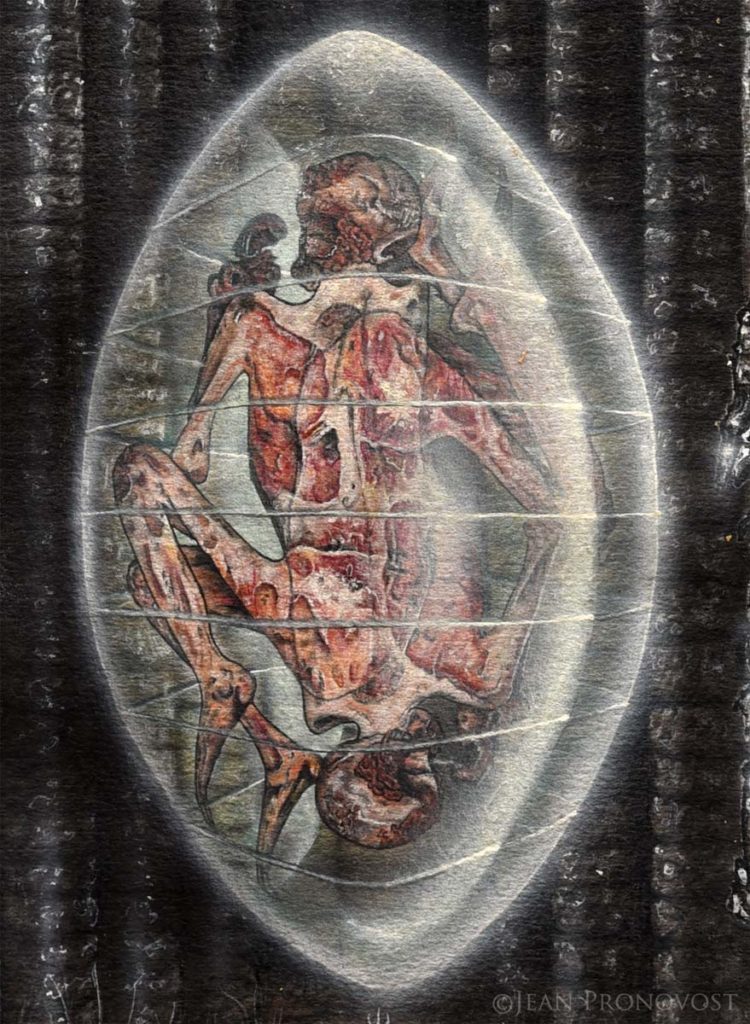 In this second painting in the series, we arrive at a large doorway deep inside an unknown ancient temple. There are two old priest mummies standing guard on either side of this mystical passage. The frame around this doorway has some scripture on it, and the walls have deity faces. This place and these priestly mummies have a level of energy that renders them feeling alive – they could speak to us. Does this passage lead to the land of the dead or the land of the living? It’s an enigma that can only be solved by going through it. The left one is dressed like a modern Catholic cardinal, complete with hat and robe, and he has his hands folded together and pointing downward.

The mummy on the right is Egyptian, he wears a long shroud, and his arms are crossed on his chest and pointing upwards. These two mummies come from different faiths that have contrary views on death and life, and this is symbolically understood in their arm placement. In the center of the piece, there is a radiant egg with a primitive, human-like form inside of it, and it looks almost ready to be born. The egg is the symbol of rebirth. At this point we can see the line of composition is a straight line, there is a balance between the priests and the egg. Under this egg are three owls, two are dead, and one is alive. Here we are again confronted with symbols of life and death, brought together in a surreal exchange to show us the connections between them. 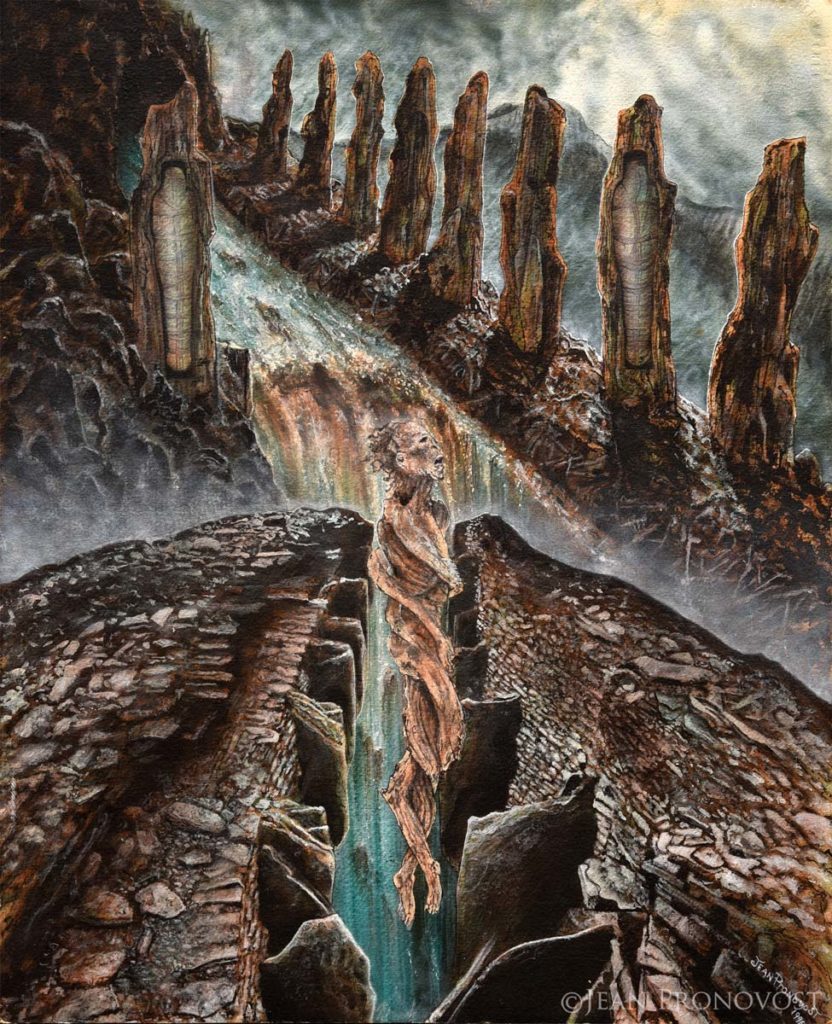 In this third and final painting in the series, we find ourselves in a landscape with an impossible perspective that feels unrealistic and angularly very strange. In this scene, we find the intermingling of symbols of life and death, and a depiction of the passage between them again. The line of composition is now an inverted triangle: the human-like character in the middle is pointing downwards while the mummy figures stand and flow upwards.

This piece is also the brightest in colour of the three; it takes place above ground and in daylight. The primitive man has now hatched from the egg, his body is twisted and contorted. He looks like he is trying to break free from this interdimensional struggle. The rocks on the cliffs around him are a similar type to those found at Stonehenge, and they lay in various directions creating a feeling of disjunction and confusion