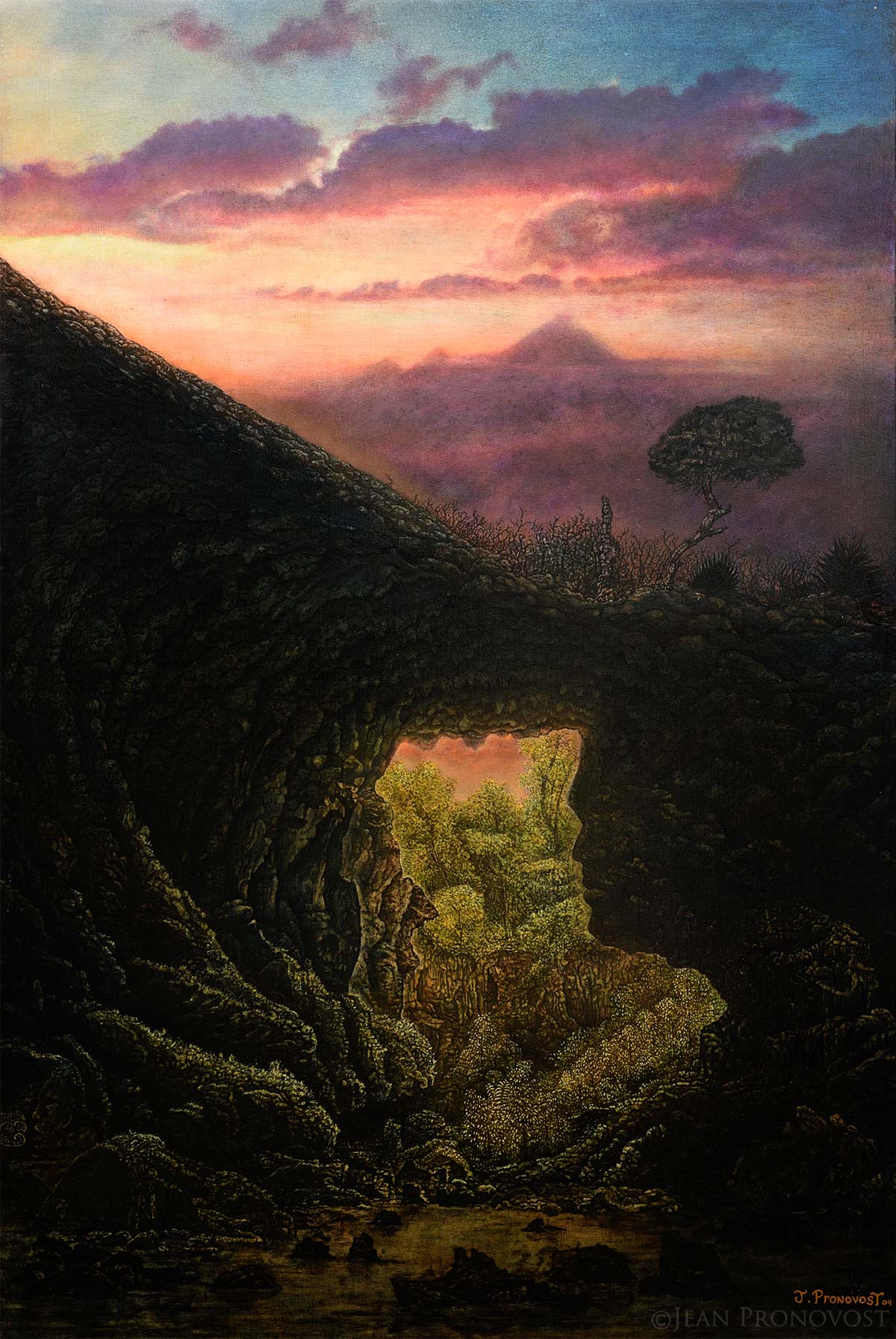 THE MOUTH OF THE SACRED HOUSE II

THE MOUTH OF THE SACRED HOUSE II by jean pronovost

In this mystical and surreal painting, we are transported to Acatenango, a stratovolcano in Guatemala. This piece, in title and content, makes reference to the underworld of the Mayan mythology: known as ‘Xibalba’ it is the lowest of the nine underworlds and is the realm of the dead. It is said that every cave gives you access to Xibalba. But we should not think this domain is evil or bad, rather it is just another and necessary part of life – in the natural cycle, with birth comes death. This beautiful serene landscape gives us a tiny glimpse into Xibalba, and it holds some wondrous surprises.

Just before the opening of the cave, there is a path that leads to the foot of the rocks. Look closely at these rocks, and you will see a variety of hidden figures – profiles of a crocodile, a jaguar, a turtle, a human and Mayan god faces. As you let your imagination roam the rocks looking for characters, your eyes naturally begin to move towards the cave opening. With such brilliant light emerging and so much lush, green foliage the feeling is vibrant and energetic. This cave opening creates such a glowing and vivid contrast against the dark rocks that frame it. The world inside the cave looks more real than the dreamy world above it.

On top of the rocky ledge above the cave door, there is a single tree growing, and beside it some small vegetation. The sky and clouds tell us it is dusk: the soft tones of yellow and red give way to deep blue twilight. The sun is setting on another day, and the moon will soon arrive. This, of course, also symbolizes the end of life. The landscape towards the horizon feels mellow and soft as if it is basking in the sunset, and it has a light fog stretching over it. There is a mountain in the distance that almost touches the lingering clouds in the sky. The feeling here is peaceful and tranquil as if the world is getting ready to go to sleep. The end of the day is nothing to fear, and neither is the underworld of Xibalba.