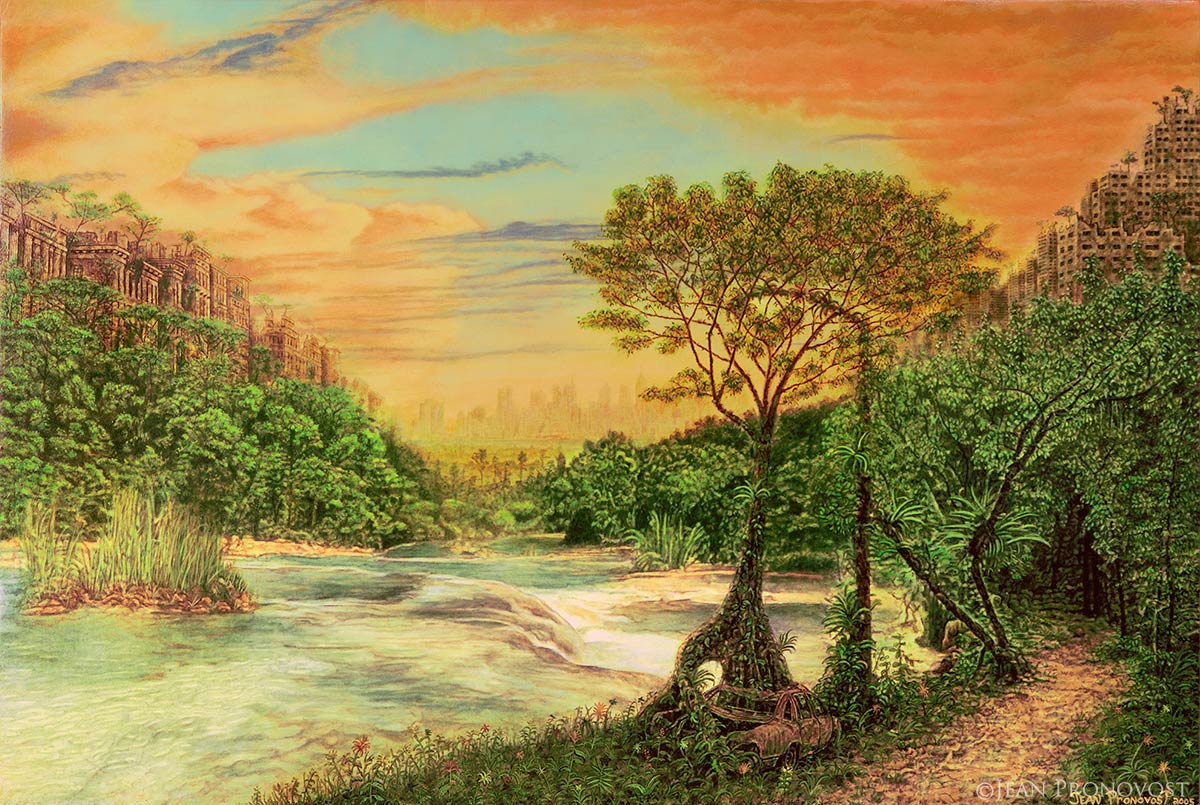 Imagine, 2000 years into the future, an explorer is walking through the remains of an ancient lost city. Amongst the vines and overgrown trees, there are tall concrete and steel buildings that are crumbling and rusted. On a pathway there is the body of an old car, it’s barely discernible because there is a tree growing out of it and foliage covering it. Next to it is a streetlight, also wrapped in vegetation. No doubt underneath all the flowers, grasses and bushes there are more objects of our civilization hidden from view that nature has consumed: maybe a metal sign that says “New York City,” some old tires, some tin soda cans, and a park bench or two. There are some beautiful artifacts scattered across this once great city, but most of what remains visible are the iron and brick frames of structures that have broken, collapsed, and succumbed to the power of nature. If you were this future explorer in New York, what would you think of our culture?

This imaginative painting takes us into a plausible future, looking through the eyes of someone exploring through the area once known as Greenpoint, Brooklyn. Humans have left and moved on, or maybe they are extinct. Instead of a frightening and bleak apocalypse like we see in the movies, this future is filled with sunshine, trees, and rivers that have consumed a concrete city. Just like the ruins of the ancient Mayan, Egyptians, Romans, or Greeks, New York will also be abandoned, fall into decay, and return to the earth. But, these far older civilizations built their monumental structures out of marble and stone – organic, strong materials meant to last for an eternity. In contrast, our modern cities seem intended to last a century at best, and so the skyscrapers and modern monoliths we erect today will likely return to nature much faster. The iconic Empire State Building will become another object for the vegetation to overcome and overgrow.

The city buildings in the background on the left and right are abandoned and deteriorating. The trees now climb up and through them to reach the sun. There is a winding path that runs alongside the water, once a city sidewalk made of concrete it is now rougher terrain with rich foliage and flowers, that has swallowed things we left behind. The river rustles and flows, bursting with life, in the middle of what once was a city. The sky is peaceful, and the clouds are streaked with the colours of a glorious sunset. This city once flooded with people is now overflowing in lush, vibrant vegetation. Nature has taken over and repurposed Greenpoint – finally making it truly GREEN!

The title, for those unaware, is very ironic: Greenpoint, Brooklyn, is an industrial site that lacks a lot of ‘green’ and natural landscape. Its waterfront is primarily construction garbage and dilapidated warehouses covered in graffiti. While this place will no doubt be gentrified and populate with luxury condos and shopping plazas, it still won’t live up to its name.