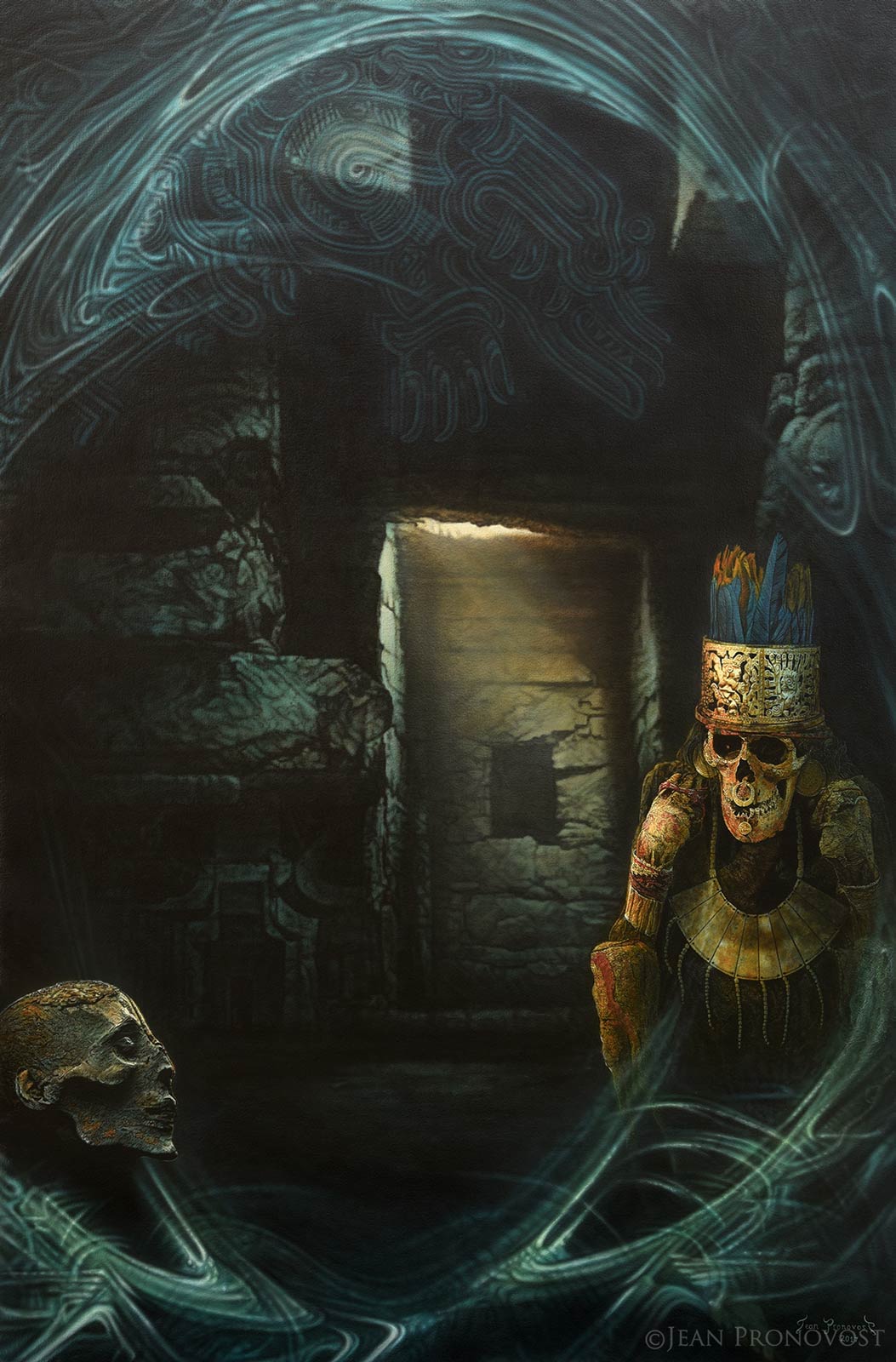 The title of this captivating and mystical painting loosely translates as ‘the arrival of the ancestor.’ It was inspired by a journey to an ancient Chavin temple in Peru.
Here we see a fantastical scene with two mummies from two different civilizations: one from Africa and one from South America. Both lived in a time when the ocean was the great highway for sharing knowledge or trading goods with others across the globe. A recent discovery has revealed that some Egyptian mummies were wrapped in bandages containing coca leaves, a natural preservative. But coca didn’t grow in Egypt, or on the continent of Africa – so, is this evidence these ancient people were communicating and trading over 2500 years ago? It’s an enigma that captivates the imagination.

The symbolism of this painting is all about passage and transformation of the self. Both the Egyptian and pre-Columbian civilizations constructed amazing and intricate temples. The Chavin people built their sacred structures very deep into the earth, with four or five layers of stone construction, and they consisted of a complex system of labyrinths, corridors, and chambers. These temples were erected in a time without modern machinery or tools. Often rites and initiations to the mysteries of life and death took place in these pitch-black tunnels; the person undergoing such a journey had to confront their fears of the dark and the unknown. Ventilation shafts moved air briskly throughout, and the sound would be mysterious and scary, which enhanced the atmosphere of the labyrinth. At the end of the passage, there would be a beautiful sculpture waiting – a Lanzon – that was created before the temple itself was constructed. This statue marked the end of the labyrinth, and it was filled with supreme godly power. A successful passage here entailed the sacrifice of your old self; it was a spiritual metamorphosis that provided a more profound understanding of the natural cycle of life and death.

The Egyptian and an Incan mummy are sitting together, and a ghostly, spiritual entity encircles them. This ethereal beast is a vision, a zoomorphic spirit that helps people navigate the labyrinth: It’s an old vision, one that is a bit fearsome, that guides them through the process. The netherworld is part of the land of the living, it is part of the natural life cycle. This supernatural being, composed of Chavin iconography, has the head and paws of a jaguar and the body of a snake. It represents the earth, and the need for humans to look deep within themselves to seek vision, wisdom, and the cures for what ails them. The snake dwells in darkness underground and in the light when on the land; the jaguar lives in the forest, both on the ground and in the trees, as a top predator. This zoomorphic being wraps around these two mummies like smoke, surrounding them and flowing through them – it connects them. The rocks of the temple walls are covered in iconographic carvings, similar to the body of the spiritual animal.
In the center background of the painting, there is a passage with light flooding in from above. This symbolizes the end of the darkness, of ignorance, and the start of knowledge and truth. In this chamber, the mummies sit together almost as if they are having a friendly conversation. Near the Egyptian mummy’s head, there is another doorway just barely visible in the light, symbolizing another passage that leads to a different perspective and new wisdom. The Incan mummy is dressed in a beautiful crown of feathers representing the air and plenty of brilliant gold, which symbolizes the sun. But neither the ancient Egyptians nor the Inca would leave their dead lying out like this: they’d be placed in a special room and wrapped in some kind of ceremonial dressing. While the Inca took their dead out once a year to join the land of the living, the rest of the time the mummies were kept in a safe place, taken care of, and even fed. For these ancient civilizations and many others, death was not the end of the road or a final goodbye.

Temples and labyrinths are symbols of a transformation of the self and the passage from life to death. Even now, they offer us a profound understanding of the connection between the underworld and the living world. These mummies, along with their wisdom, are not dead. They are just in the next stage of life.