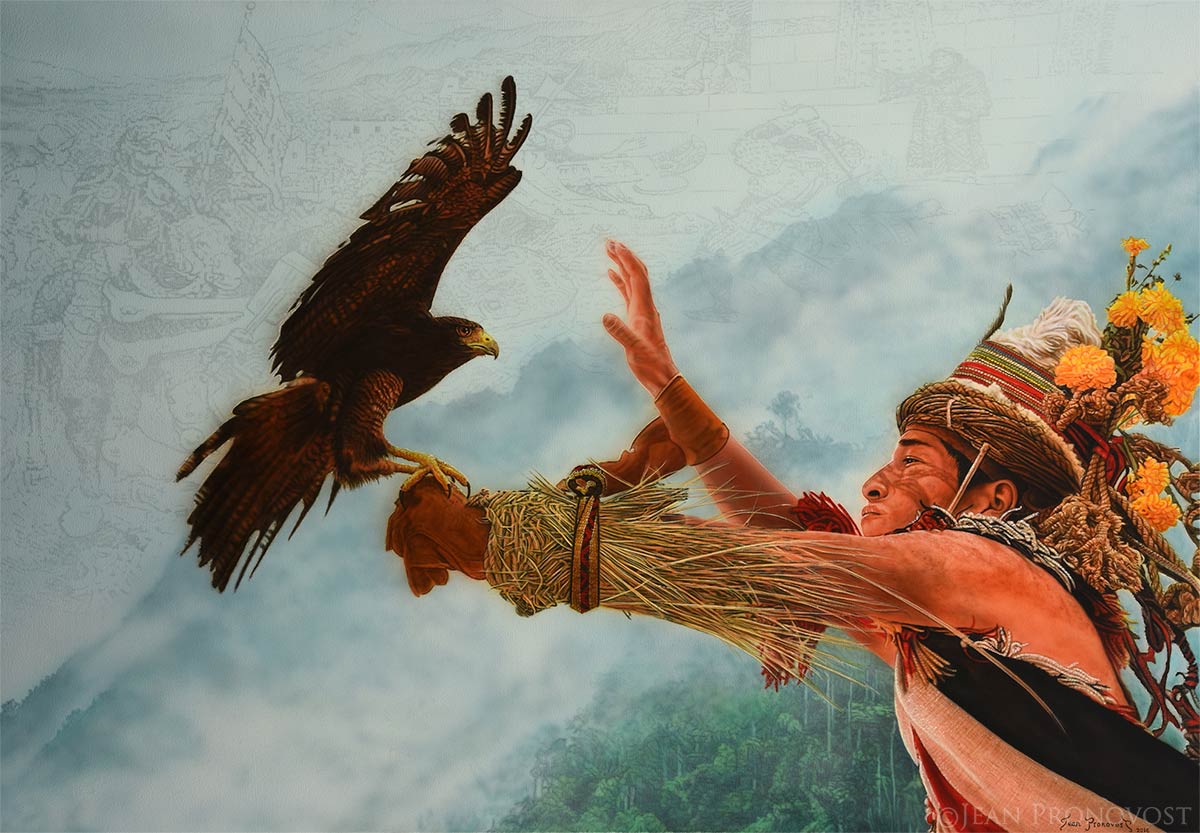 This monumental painting is paying homage to the Incan descendants of Cusco, and to the ancient Andean Civilizations and indigenous people across the world that have regenerated, reclaimed, and risen above a dark history of colonialism. This canvas brings together the past and the present, along with man and nature, to show us a modern-day depiction of a Phoenix rising from the ashes. This piece is all about connecting with the past: the place where we find old wisdom, spiritual teachings, and historical lessons. The knowledge we gain from this communion enriches our understanding of humanity and ourselves, and this can lead to a brighter future of peace and tranquility, and rich in spirituality.

On this canvas the three aspects of the old Incan cosmology are present: the world of the living (kay pacha) that consists of all perceptible entities like humans, animals, and plants; the world of above (hanac pacha) that included the sun, moon, sky and constellations; and the world of below (ucu pacha), or inner world of the dead and new life to come, that is often associated with harvest and fertility. These realms are simultaneously temporal and spatial.

Our focus is immediately drawn to the majestic and brilliant personification of hanac pacha (i.e., an Incan priest), and the eagle landing on his outstretched hand. These two are symbolic of the Incan descendants returning to their spiritual roots and to nature, and that bond between the two becoming strongly reestablished. The hanac pacha is teaching and guiding his people in the ancient traditions for their journey. It is important to see that the hanac pacha’s right hand is open, a sign of welcome and respect rather than dominance or ownership. The eagle that is coming to a rest on his hand is free; it is not tethered or bound. It is a symbol of the old Inca way of life that now returns to the people of its own free will. The body of the eagle is powerful but serene; its feathers, legs, and eye show that it is not afraid or looking to instill fear. It comes as the bearer of spirit and knowledge. In this way, we also see the eagle symbolizing the upper world (hanac pacha) and the man representing the world of the living (kay pacha). From the joining of these two, the state of recovery and reunion with their spiritual heritage and culture is clear. The vibrant colours used to paint these figures demonstrate the profound significance and enlightenment of this communion.

In the upper part, we see a faded, dark history: there’s an army of soldiers on horses, the smashing of statues, and a Catholic priest standing on the steps of a temple that is not his. This part of the painting speaks to the many battles that took place in Peru where the Spanish, filled with greed for gold, arrogance, and racism, sought to strip the Inca of their heritage, their natural resources and their entire way of life. This is the past the Inca have learned from and have overcome on their journey to reconnect with their old ways. In the background, we see a magnificent yet clouded mountain that is covered in jungle, meant to signify the landscape of Peru. This history took place here, and the land bears scars from the Spanish like the people do. And just like the Incan descendants, it too has found its spiritual roots again. The energy of these Incan ancestors was a flame that couldn’t be extinguished, and it smoldered until the people returned to breathe new life into it. This painting is a celebration of that recurrence, the renewed connection between the people living in Cusco (the capital of the Incan empire, named at the time Qorikancha) and their ancient ancestors. Roots they are now inspired by, speak about openly and can be proud of.