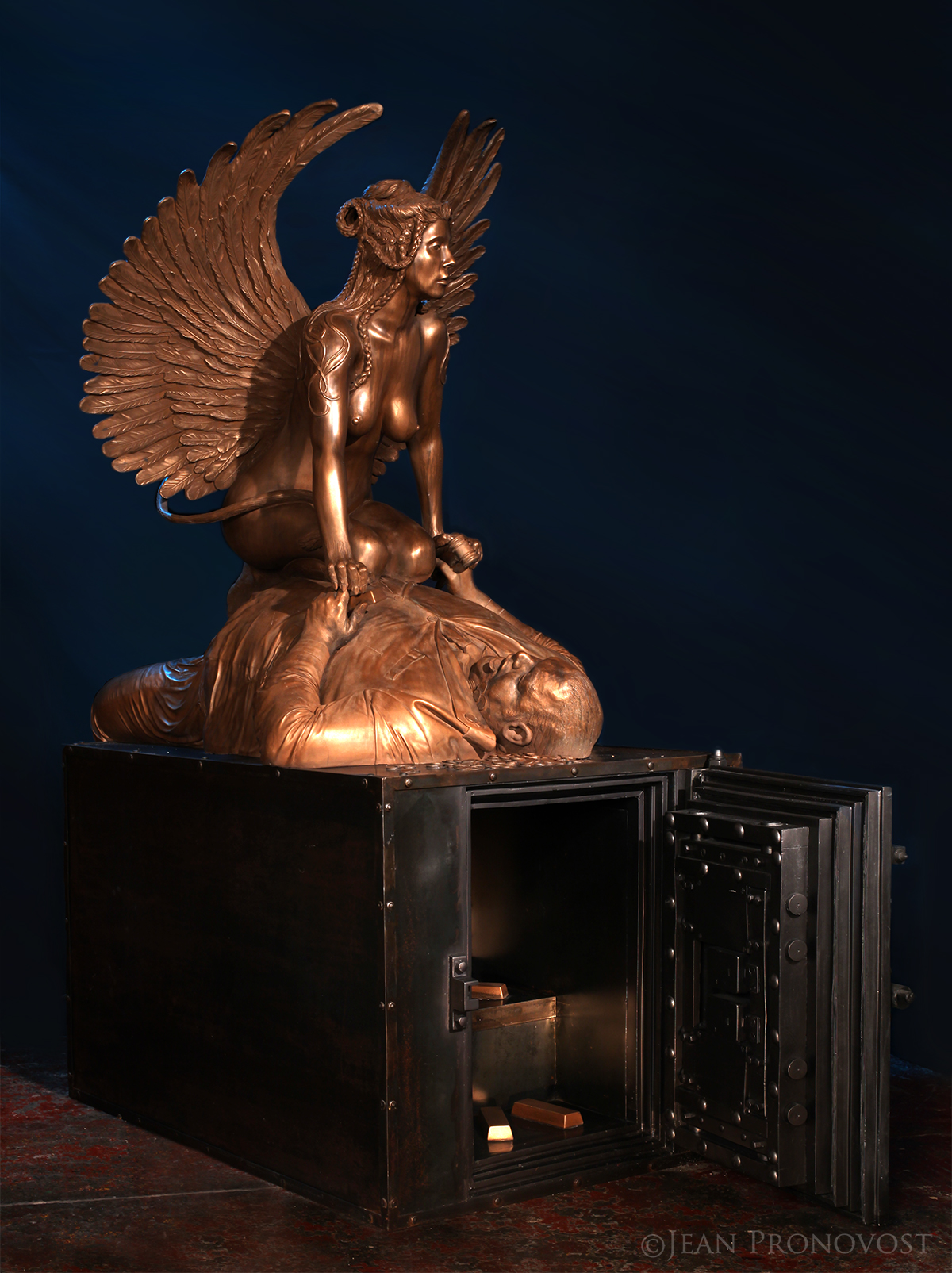 THE SPHINX by jean pronovost

“What is that which has one voice and yet becomes four-footed and two-footed and three-footed?” This is the riddle of the Sphinx.  To answer it, you must first know yourself.  If you answer wrongly, she devours you. Identity issues are her favorite snack!

Regarded as the guardian of civilization for the Egyptians and the one who puts a man into question with her riddle in several ancient Greek plays and myths, the Sphinx is a timeless and powerful symbolic figure. She is an ancient symbol of equilibrium and justice, one with a dual nature: her beautiful female body has the paws and tail of a lion that represent the power of the earth, and the wings of an eagle that signify the air and spirit. This dualism brings us back to questioning ourselves, as individuals and as a society. We must strive to keep in balance these two natures we all possess: our materialism and power and then our idealism and compassion. She symbolizes the highest longing of mankind – to raise itself above its lower animal nature to its highest potential and spirit. She is the symbol of hope that humanity can overcome its appetites and vices to achieve a greater sense of harmony and justice. In her Greek form, as a goddess rather than a king as we see with the Egyptian version, she also represents fertility. We can begin again and give rise to new ideals.

We find the Sphinx here forcefully kneeling on the chest of a banker who is vomiting money while lying on a safe. She is pinning him down, an act of overcoming the immense greed and abusive power occurring in our contemporary world. She seeks justice for all. The banker represents the corporations and powerful men who lie and steal from the public for their own gain. He wants more riches for himself. Where their hands meet on the left, we see a gavel and on the right, a gold bar, and the Sphinx appears to be wrestling these things from his fat fingers in order to restore the balance we all so badly need. The safe below his bloated body is our public treasury, looted by himself and the other greedy corporations. It is nearly empty, only a few gold bars remain inside that he didn’t get the chance to take yet. When we let our materialism rule, we become empty inside, filled with nothingness – our most significant treasures of compassion, idealism, and spirit become lost and we fall into decay. We get out of balance when we don’t know who and what we are. We become the meal of bankers, corporations, and the Sphinx.

The Sphinx symbolizes our dream and claim to justice and balance in life, for ourselves and for others. She inspires us to strive for and achieve the equilibrium of our two natures. She is an old goddess for a new day, and she’s also very hungry.

THE SPHINX - THE PROCESS