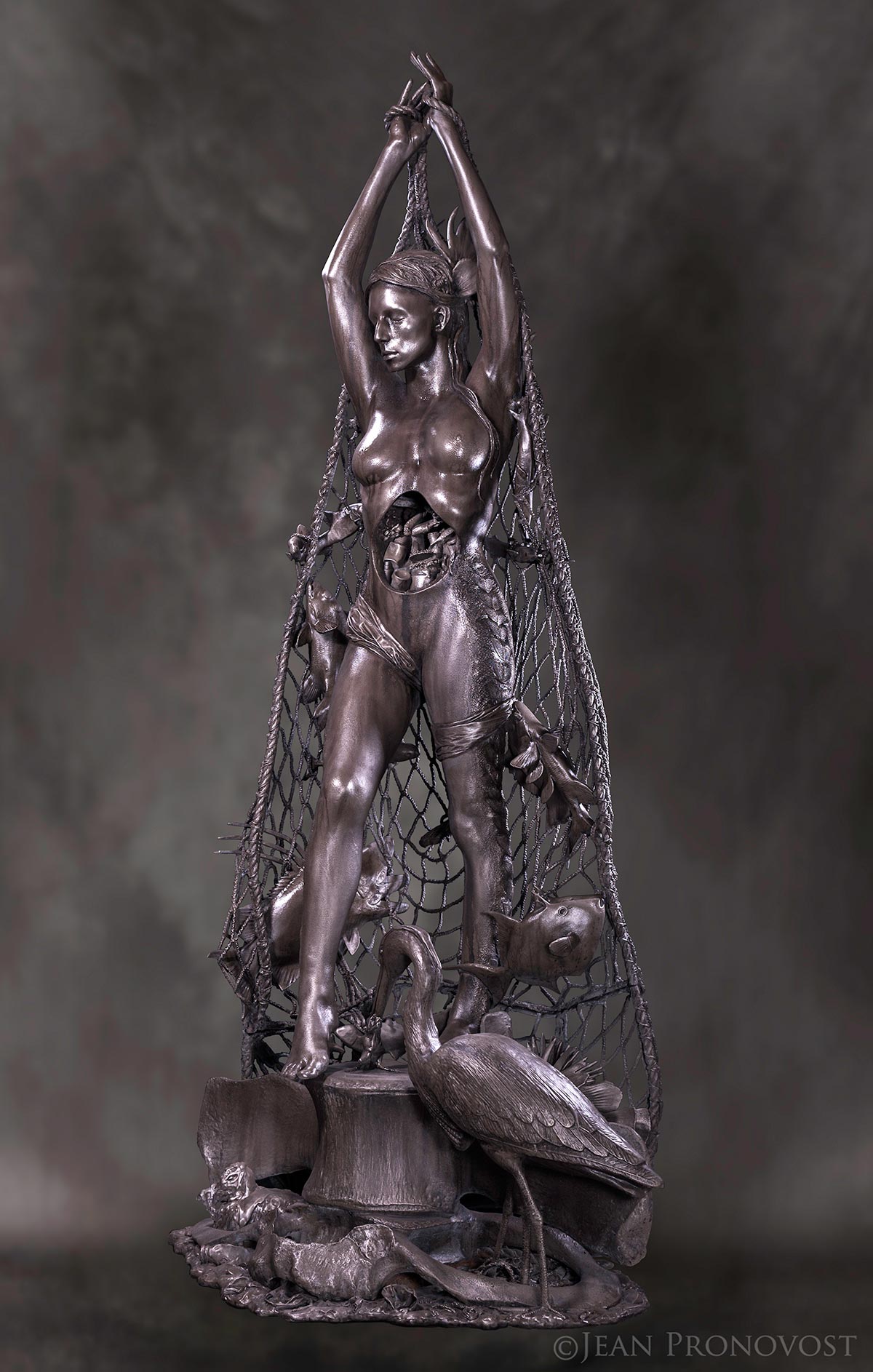 TALES FROM THE PLASTIC ISLAND

TALES FROM THE PLASTIC ISLAND by jean pronovost

To say this sculpture is epic is an understatement. So many components to it and so many messages to take in; every inch has something to inspire deep thought. There’s beauty, and there are beasts. Like all great allegories, she’s got a great tale to tell you and at the end of it all a powerful lesson or two to learn.

The woman who stands at the center of the plastic island contains as many symbols as there is garbage in her belly. This beautiful woman filled with trash and apathy is one we cannot ignore or unsee. She is our present and our future – corruption, death, and beautiful toxic garbage. But within this figure that symbolizes the devastating clash of the natural and the artificial worlds of man, there are two messages to see: a warning of the worst and a hope for a brighter future. While we humans are trashing and contaminating our planet and ourselves, nature and its wildlife will eventually fight back and outlast us.

The base of this sculpture has some large whale bones, which, as we know, is the largest marine mammal. Here they are used as the pedestal the woman stands on, and they symbolize its own perdition: we, this small species by comparison, with our lavish and expansive lifestyle, are causing this massive creature’s premature extinction. Then there is a heron, a frog, and a duck covered in oil. The heron has 3 legs: the toxic environment he lives in has corrupted his body and very genetics. He is the evidence of the dangerous evolution that occurs with the use and abuse of plastics, chemicals, and pharmaceuticals. The heron, like us, just eats and drinks without caring or knowing what he is ingesting, and his ignorance has brought about this disfigurement. The frog has a special symbolic status: it is both fragile and strong. This creature is one of the first signs of an unhealthy environment: if the water it lives in is polluted, frogs are the first show signs of genetic deformities and die off. But you’ll notice this frog is fighting the heron back, it is resisting being consumed, symbolizing nature and its perseverance; the frog may seem small, but like nature, it can be mighty. Humans are not the top species of the natural world, nature will carry on without us – we may kill and evolve, but it is stronger than us and will survive and thrive when we are gone. The oil-soaked duck conveys a clear sense of how much we disrespect and disregard nature while pursuing the advancement of our own species. Who cares about herons, frogs, ducks and the oceans and lakes when our vehicles need petrol! Underneath the base and coming up from it is a fisherman’s net that has snagged some mutated fish. There are some with two heads and some with three sets of fins, a bastardization of their natural design. Our choice to be careless, polluting humans have landed creatures of the water ensnared in our mess and as we evolve and mutate, so do they. The woman is also caught up in the net, but the symbolism present tells us it is a net of her own design: she is a victim of her own ignorance and excess. With her eyes closed, we see that she is intentionally blind to the consequences of her consumption and with her submissive body position we see that she simply yields to her desire to be beautiful, mentally numb, and the delusion she holds of being the top of the food chain. What we see is that she is caught and she doesn’t care.

At the center of the sculpture, we see the woman is also undergoing a mutation of her own body; her hips and thighs have the scales of a sturgeon on the skin. The sturgeon is a prehistoric fish that has survived ice ages and natural disasters. These scales now appearing on a human as a mutation demonstrate the strength and power of nature. It will overcome us since we are not above it but a part of it. The material that comes across her right hip and through her groin is a plastic bag. Inside her abdomen, we see a collection of various familiar plastic garbage that is essential to our modern lifestyle and aesthetic: makeup containers, perfume bottles, pill bottles that once contained anti-depressants, a cellular phone, and some mosquito repellent. Much of this trash sits in her womb, the area that is associated with birth and nurturing. The area that should bring forth new life is now filled with single-use containers and substances we use to escape reality, and these human creations destroy the lifecycle of all creatures. Our mass consumption is consuming all things in its path.

When we look closer at this collection of trash inside the woman, there are two significant symbols to behold. One is a crab that is scavenging about. It has made its home in the wasteland of her womb and has become a consumer of our garbage. It is as if we have given birth to mass consumption across species, we have encouraged the mentality of collecting useless crap. Consumption as an addiction is a symbol of void and nothingness. The other to take notice of is the clamshell that contains a single pearl. This pearl is real silver, and it is the only part of the sculpture that is not corrupted or corroded or tarnished – it outshines everything. The pearl is a symbol of fertility and hope for the future. It contrasts the silver powder that coats the entire sculpture, which has tarnished and appears battered. Silver, here, is a metaphor for money, symbolizing how it causally corrupts and degrades humanity and nature. America was founded on silver; the Spanish (Plata) and the French (argent) still use silver to name their currency; for a time, silver was worth more than gold. What turns money into such a destructive thing is capitalism: it is the net that snags us up, victimizes us, and corrupts our very being and the entire nature around us. Capitalism, with its creation of artificial needs and endless desires that are never satisfied, is the cause of all this pollution, corruption, and destruction of both humans and the natural environment. But just as we throw away our plastic necessities, nature will eventually toss us out in search of better things

TALES FROM PLASTIC ISLAND - THE PROCESS