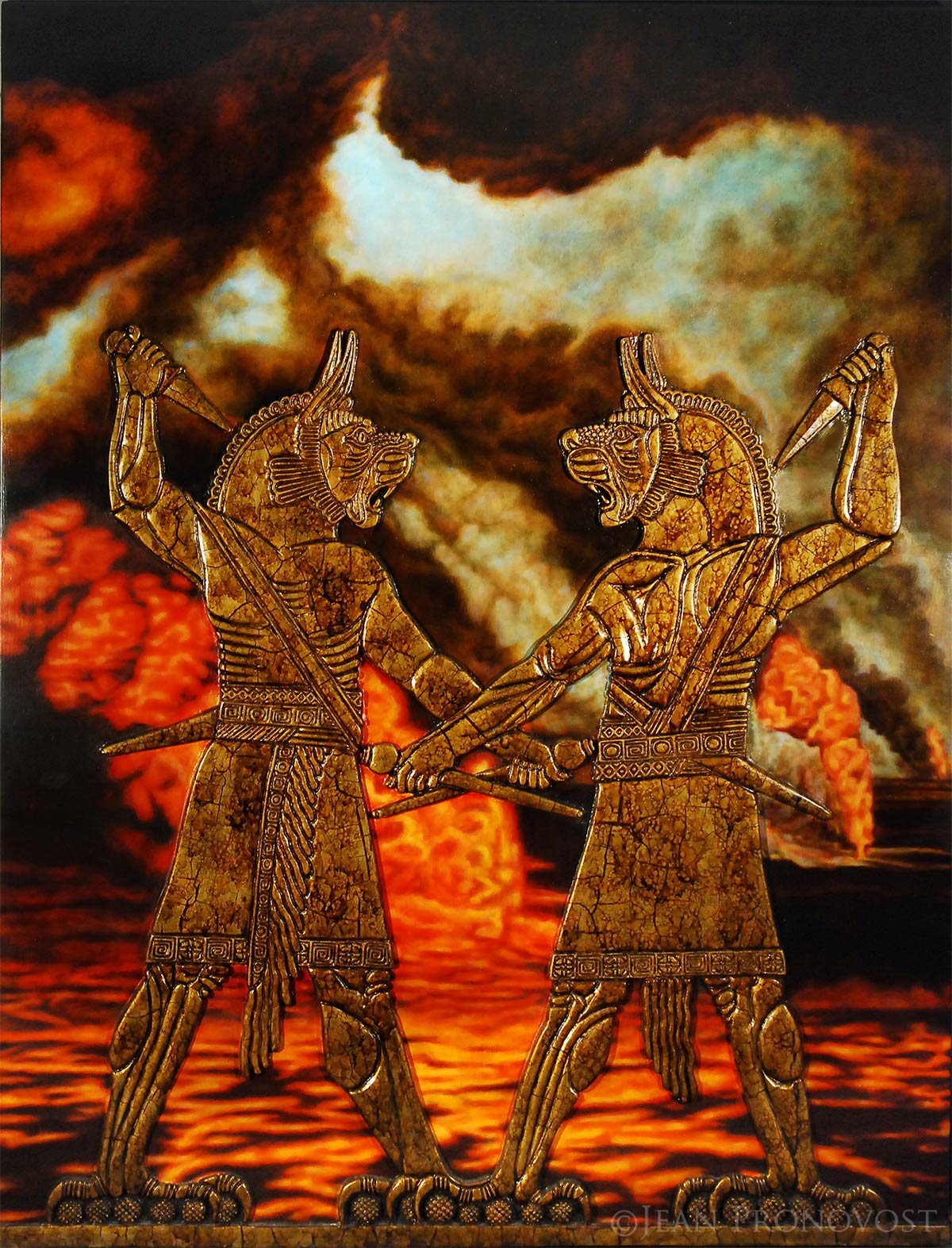 FOR THE QUEST OF THE BLACK GOLD

FOR THE QUEST OF THE BLACK GOLD by jean pronovost

The sky is filled with thick plumes of toxic, black smoke and intense, red-hot flames burn across oil wells in this tragic and frightening painting. As you stare into this fiery scene, it feels so suffocating and stifling, and the threat of being consumed is overpowering. Is this hell on earth? In many ways, yes: it is a hell we have created in our endless quest and fight for power. We have turned beautiful nature and all its riches and resources into a polluted, distorted, and impoverished system of commodities and profits. We’d rather set oil fields on fire than let the enemy take them, and it’s preferable to let citizens die than to give up an inch of land in negotiations. Give me power or give me death, that’s the motto. Who needs hell when the living world is like this?

The scene painted here calls to mind the first Iraq War, and the burning of the petroleum wells carried out by Saddam Hussein as the American troops were approaching. Iraq is part of the Fertile Crescent – along with Israel, Palestinian Territories, Syria, Lebanon, Egypt, and Jordan as well as the southeastern fringe of Turkey and the western fringes of Iran – and this is referred to as the cradle of civilization. It is the place where humans and their culture began. The Christian bible originated here, the garden of Eden was likely here, and Jesus was said to have been born here too. This is a sacred place, and yet for centuries, it has been a region constantly experiencing war and violent bloodshed.

In front of the enormous blazing fire, we see two zoomorphic gods: they each have the head and paws of a lion and the body of a human. These two represent the fight for power occurring between the East and West. Each holds a scepter in their lowered hand and a dagger in their raised hand, symbolizing power and violence. These young, strong gods are willing to die for territory and supremacy. Here, they take on a slightly different meaning: People of Mesopotamia and the pre-Islamic Arabia civilization had jinn (genie), angels, and demons – supernatural creatures possessing good and bad powers. The line between jinn and demon was somewhat blurry. Just like the principle of ‘fight fire with fire’ or installing gargoyles on a church exterior, jinns were used as evil spirits to fight evil. These zoomorphic deities – hungry for power – are employed like jinns: they represent us in the hopes that we will wake up and push this evil outside of our minds and become better. The biggest source of the evil state of mind, for us, is sometimes political – we vote for people to represent us, and they seem to continually land us in conflicts against our will. They could be called democratically elected evil spirits.

This powerful painting’s title has a few layers of meaning that should be mentioned. First and most obvious is the reference to ‘black gold’ is about petroleum and its value in our modern lives – we use it to fuel our economy, and its by-products are used to make countless everyday things. The second layer of meaning is in the two gods themselves: they are made of gold, one of the most desirable and richest metals on earth. Like the Golden calf in the story of Moses, we worship gold like a false idol. We live by the gold standard; we covet and adore wealth. But these figures look tarnished, and that leads to the third layer of symbolism. They have been rubbed with a patina made from tar, which comes from petroleum. These golden gods are corroded, much like our morality when we quest for power.

FOR THE QUEST OF THE BLACK GOLD - THE PROCESS