THE SPHINX: A SHORT FEATURE ABOUT THE GENESIS OF A MONUMENTAL WORK 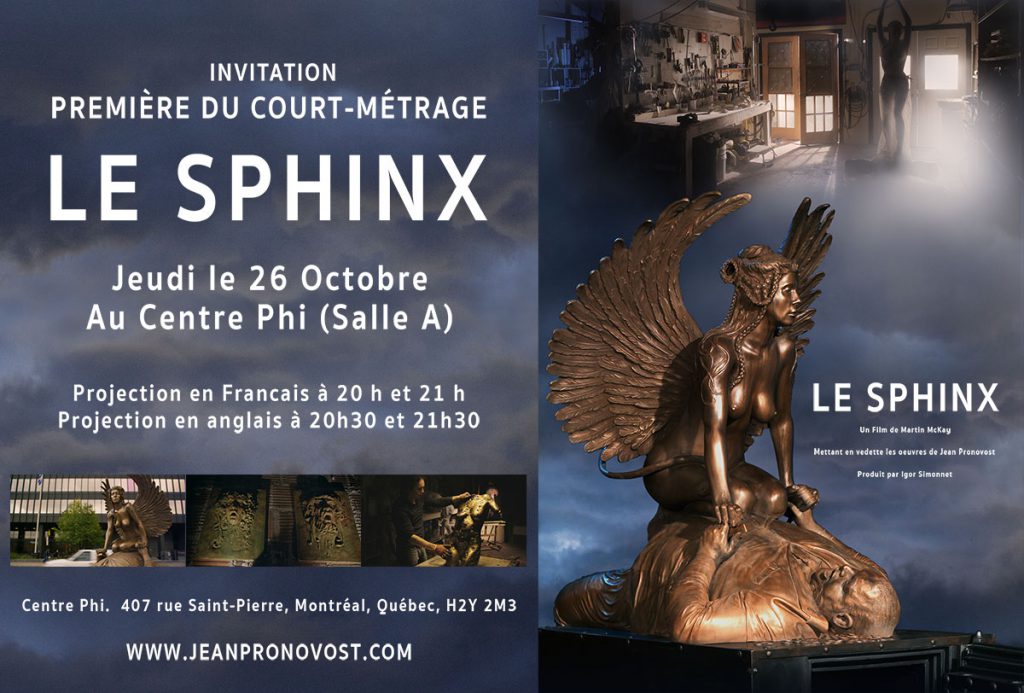 Montréal, October 12, 2017 – At Centre Phi, on Thursday, October 26, internationally acclaimed painter and sculptor Jean Pronovost will present the world premiere of the short film The Sphinx. Directed by Martin McKay and narrated by actor Guy Nadon, the film walks us through the creative journey that led to the birth of the titular evocative sculpture. On top of watching the film, the attending public will have the opportunity to admire on site the work in all its splendour, as well as a brand new sculpture by Pronovost: The Bacchante.

Pronovost was inspired by his European travels, where he took in many different representations of the Sphinx. This important millennia-old mythological figure acted as the guardian of ancient Egyptian civilisation. Pronovost transforms the ancient features of this symbol to perfectly adapt them to modernity. A gigantic man, representing the greed of our contemporary society, holds in his right hand a gold ingot, pilfered from the public treasury, while holding in his left hand the gavel of Justice. Under him lies an open safe, deprived of its contents. In this creation, the Sphinx symbolizes hope, vanquishing the excesses of human folly.

This 800-pound piece, comprised of five separate parts, is primarily composed of bronze, resin, and steel. The artist invested thousands of hours of hard work to give life to this colossal sculpture, constructed between 2009 and 2012.

Driven by passion for history and mythology, Pronovost breathes vitality into larger-than-life gods and myths. He skillfully amalgamates anachronisms and ancestral painting techniques, thus putting forth works both contemplative and heartfelt. Celebrating the essential and bucking superficiality, the painter-sculptor opens the doors towards a unique universe.

In this time and age where the human being is bombarded by technological devices, where consciousness is led astray by the hunt for material excess, the artist questions our origins and invites us to reflect on the world in a new way.

Jean Pronovost is also the President of the Canadian Society for Art of Imagination. He’s presently displaying some of his work at the One Art Space Gallery of New York, as part of a collective exhibit bringing together more than 50 international artists. Recently, last October, he also won the Audience Award at the SCULPTURE exhibit, which took place at the Palais des Congrès. End of November, the creator will also display his paintings in London, England, as well as in Colombia.

You can view his work on his site: www.jeanpronovost.com