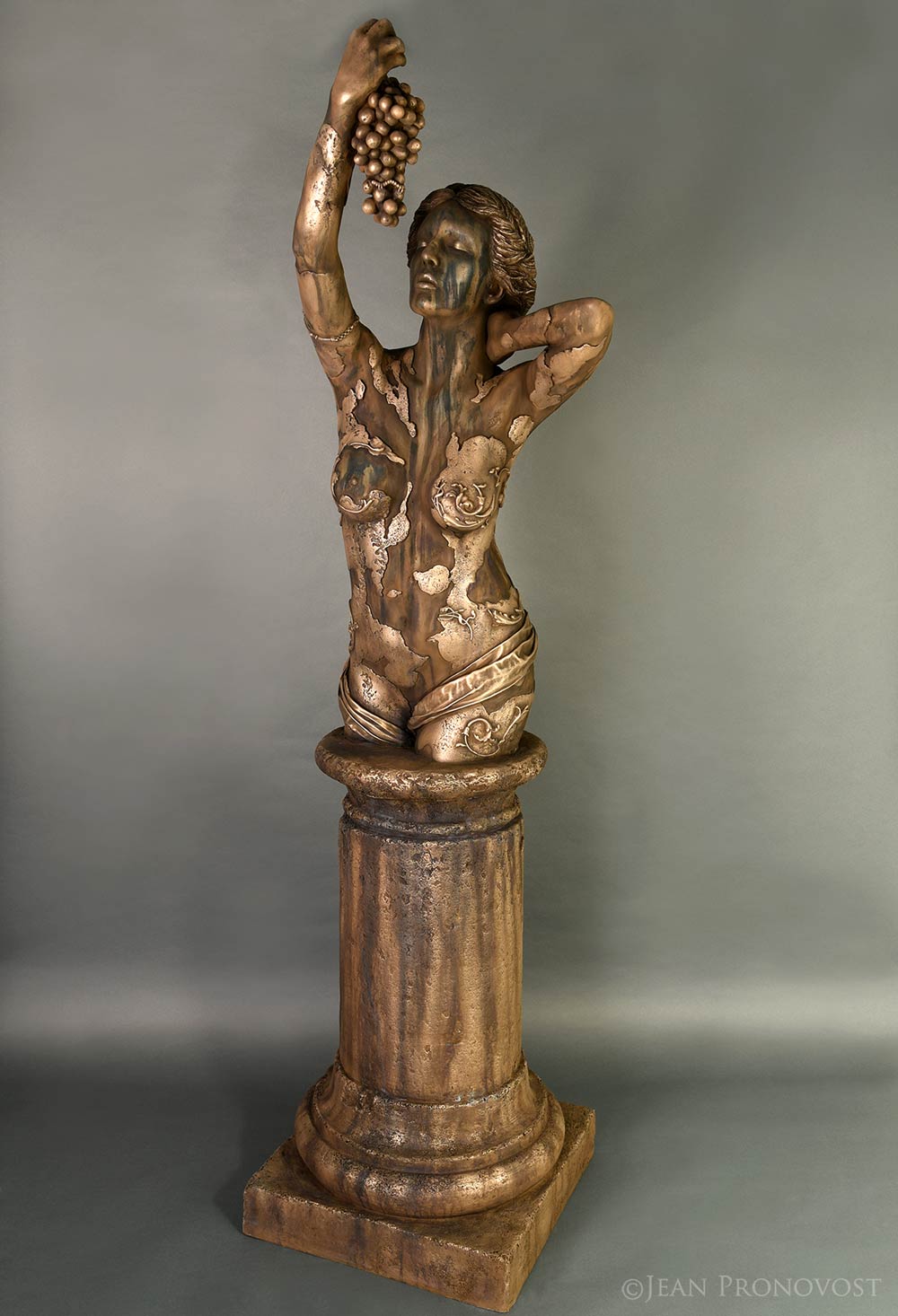 THE MAENAD by jean pronovost

This sculpture of a beautiful, young Grecian Maenad depicts her relaxing and tasting some sweet fruit. With her eyes closed and her head slightly tipped backward against her hand, she looks as if she has not a care in the world. That worm lurking in her grapes looks pretty stressed though, and he’s going to leave a bad taste in her mouth.

Maenads appear in both ancient Greece and then in Rome, as the priestesses and followers of the god Dionysus and later Bacchus. These were the gods of the grape harvest, wine-making and wine, fruitfulness and fertility, theatre, and religious ecstasy. Maenads were often portrayed as erratic entranced women inspired by Dionysus into states of euphoric frenzy while they danced and drank, and wore fawn skins. This celebration ritual was performed once a year. Wine, dancing and wearing animal printed clothing sounds more like a New York City nightclub on a Saturday night than a ritual worshipping a god.

This Grecian-styled Maenad with a Caucasian face is mounted atop a column and has some symbolic twists to convey a warning to our contemporary world. We see ourselves in her, and this familiarity should make her message more urgent and clear: we are repeating the mistakes of her time and headed for the same fate. The grapes she holds in her left hand are infested by worms and are rotting, but she doesn’t see this as her eyes wilfully shut. She is blind to the rotten fruit she is about to eat. Whether she is perceived as wilfully blind or ignorantly blind, it amounts to the same thing: she isn’t waking up to the truth of what she consumes, and she will suffer for it. Her ornamental skin appears to be peeling off and rather porous, and what lies beneath it is tarnished, unhealthy, and abused. Her lovely but fake exterior can no longer hide the ugliness inside of her. Once again, she seems oblivious to her current state as her eyes are closed. She is a critical allegory for our modern world, concerning the real cost for living in excess: when the outer aesthetic and appearance becomes more important than inner wellbeing and balance, our lives become filled with rot and disillusionment. Living in decadence is truly living in decay.

The oxidation of bronze and erosion of the column is also meant to symbolize the decline of the bronze era. The bronze era is past, and now our era is repeating the same errors and heading in the same direction – corrupted mind, being, and thoughts.

THE MAENAD - THE PROCESS