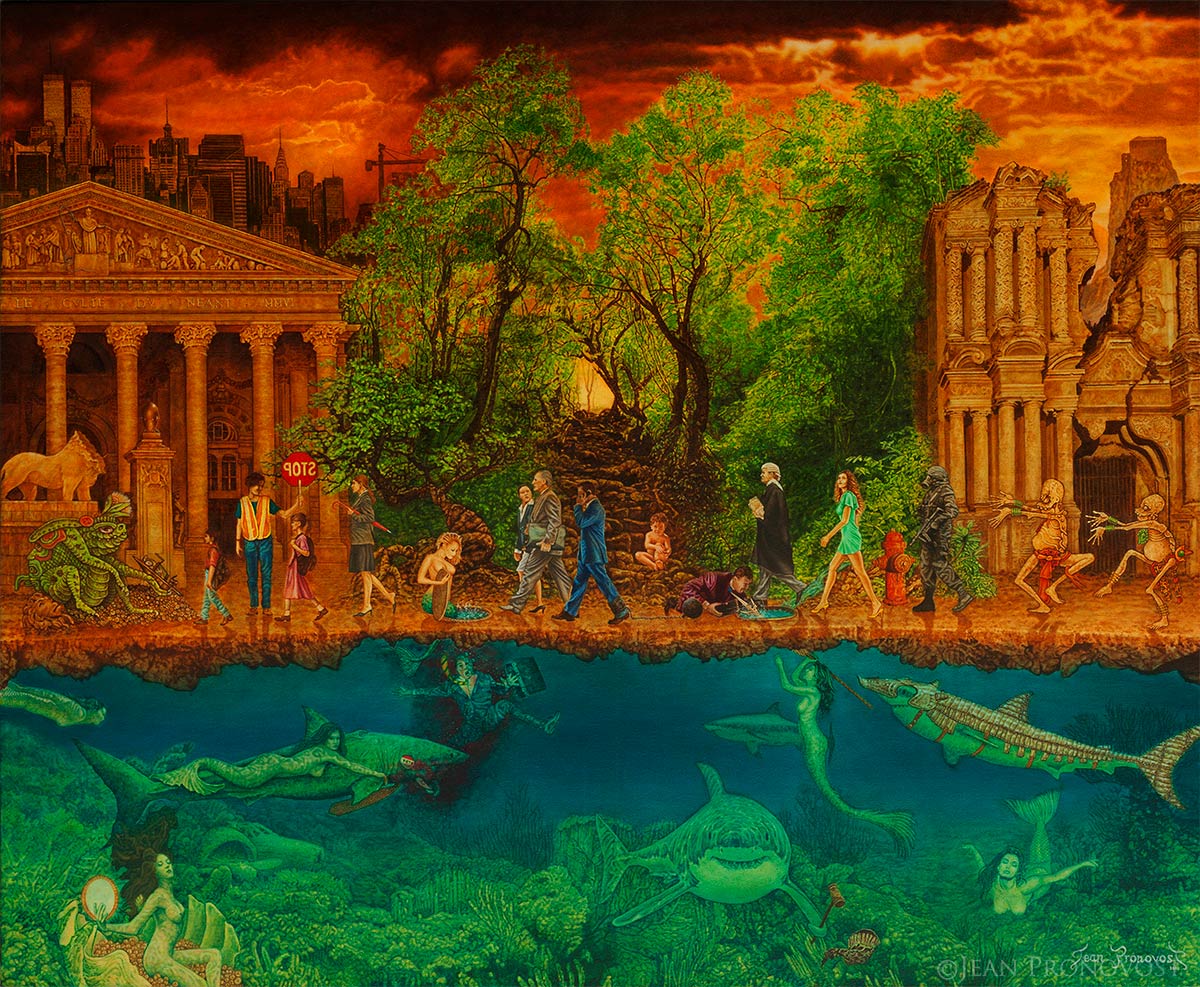 THE CULT OF NOTHINGNESS

THE CULT OF NOTHINGNESS by jean pronovost

Reminiscent of a Hieronymus Bosch piece, this monumental painting is a street scene of delights containing an allegory about our contemporary lifestyle. With the use of fantastical symbolism and vibrant colours and a seamless blend of imagination and reality, we see ourselves without any mask of idealization. So many people we run across every day are looking for something, but they aren’t finding what they seek – they seem so lost or empty inside. We’ve all come across a businessman walking and talking on his cell phone; he’s so busy trying to close a deal and get his commission that he is otherwise utterly oblivious to the world around him. Here, we see him depicted as dragging an iron ball that is chained to his ankle, representing the prisoner he really is to capitalism. Like him, each of the people we see in this scene is headed somewhere, but they don’t question why and, most importantly, is this the right way to go?

This incredible painting poses some powerful questions to us: what is the meaning of our lives, and how are we getting there? This piece flows from right to left, going from the old spiritual ways to the new materialistic ones: the gods we once worshipped have been replaced with deities of money, stocks, and bonds. On the right, we see a church that sits just in front of an ancient Cathar temple, both are crumbling from time and neglect. This church was built on top of the remains of an ancient Mayan temple, representing how the Spanish Catholics usurped the spiritual beliefs and practices of the people in Central and South America. In front of the old Cathar temple are two Mayan gods dancing angrily; they were pushed from their temple when it was replaced by the church, and the people that once worshipped them and they saw as having such great potential now slide into grotesque destruction. Fed up, these old gods push the people towards their chosen perdition – greed.

To the left of the painting, we see a building that resembles the old British Bank in London. This is the place where capitalism began and, somewhat ironically, it is made to look like an ancient Greek temple. In front of this false temple, we see two statues: one celebrates war, it has soldiers on the sides and an H-Bomb on top, and the other is a beheaded lion, a symbol of the once noble systems and ideals we aspired to. Just in front of these two monuments, there is an ugly toad. He is holding a clock and surrounded by a big pile of gold coins, and he sits on the face of the missing lion’s head: this toad symbolizes capitalist mentality, that life’s purpose and worship are all about money now, and the old ways are worthy of kissing his butt … literally.

In the center of the landscape, we see a beautiful and lush tree-lined trail with warm, welcoming light shining through. This is nature’s way, the sacred path, and it sits between the old and new ways with the wisdom it has to offer. A small child is sitting there, watching all of the people walk by. He sits there, and he wonders; he questions where everyone is going but doesn’t try to follow. This little boy is, in fact, a self-portrait of the artist, when he was about 3 years old.

The sidewalk is flowing with characters we are all familiar with. The street-level operates as the world of appearances, the conscious reality, and the subterranean water scene below is a subconscious layer, the world of truth. Each of the people on the sidewalk has a counterpart below in the aquatic realm, taking the form of a shark or siren. It is here that we can see who and what they really are. Starting on the right, there is an anti-riot police officer at the back of the pack; he is there to enforce the new ways and keep people marching along. Below we see his counterpart shark wearing a suit of armor and imposing order. A beautiful woman is walking just ahead of him, she seems so oblivious and incredibly vain. In the water, she is the siren underneath the armored shark, swimming with her eyes closed she is willfully blind to everything and focused on only herself. Ahead of this woman is the judge, the lawmaker who creates and enforces the rules of this new world order, and below she is the shark with a gavel about to hammer an innocent, little medusa.

If you look over to the first manhole, a siren from the underworld has speared the one man who tried to rebel and turn around. But there is no going back to the old ways! Then we see a politician walking with his female assistant; he is responsible for leading the people and convincing them how great things are going. She looks very concerned about what he is telling her, and yet she stays by his side. In the aquatic underworld, he is the shark wearing the ‘vote’ badge and devouring the leg of one of his constituents. His assistant is the seductive looking siren clinging tightly to his fin and body. Then, in the bottom left corner, there is a glamorous siren holding up a mirror and sitting on a bed full of pearls. Once a symbol of fertility, they now have come to represent overabundance in all its glory. Does she represent the teacher or the crossing guard, or is she us?

The people here all march towards the bank, but they don’t question the purpose or consequences of this path. The child is the exception here; he occupies a neutral position in the painting, he sits between the old ways and the new – he is still open. We don’t see him represented in the subterranean layer because he is living authentically, he is true to himself, and he resists following the cult of nothingness.

THE CULT OF NOTHINGNESS - THE PROCESS