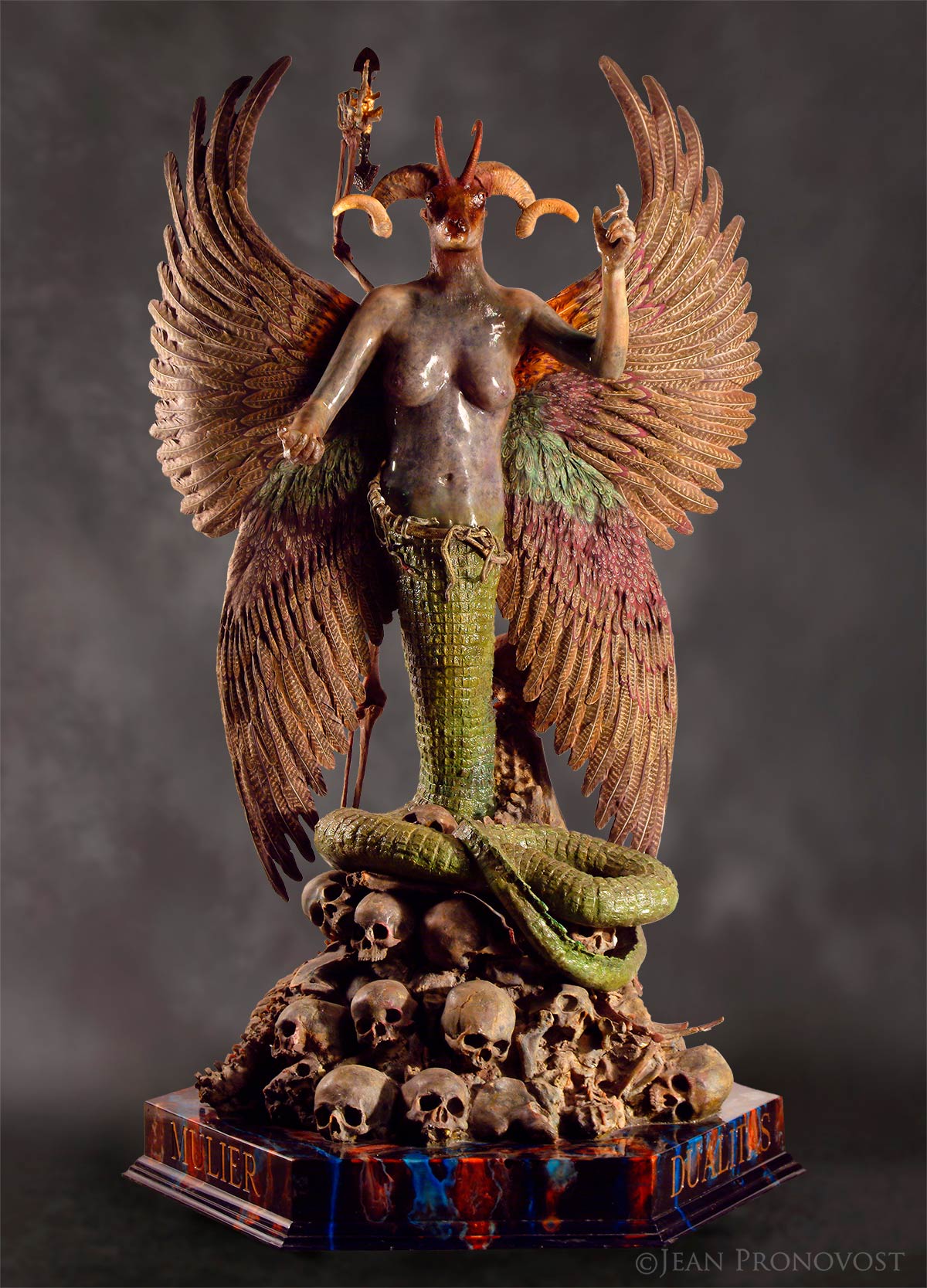 THE LORD & LADY OF DUALITY

THE LORD & LADY OF DUALITY by jean pronovost

At first glance, this magnificent sculpture is very dramatic, maybe a bit frightening, and some may even think there is something evil about it, but upon closer reflection, we begin to see a familiar truth. The colours, the textures, and the intricate combining of so many elements create harmony in duality, a symphony for the mind and the senses about life itself.

Inspired by alchemist and ancient mythology, this sculpture is all about the duality of life: male and female; life and death; and human and animal. Life is filled with duality; we find it in ourselves and in the natural world. While there are countless varieties of duality in our lives, the one we most often try to ignore or simply overlook is the necessary and interconnected relationship between the living and the dead.

The wings, the symbol of spirit, are in the shape of a butterfly’s but with eagle feathers. The significance of a butterfly is transmutation, a principle of change and growth. This highlights the notion that we can transition from darkness through to light and vice versa: we reach wisdom and truth by coming out of our ignorance and blindness, and we do this over and over.

The side representing life is female, and the side representing death is male; however, this is not to say that each side will have consistently male or female components – the sides are intermixed. On the side of the living, we see a transparent male ram’s head atop a female torso. The ram’s head is a symbol of strength and resilience. When you look closely at both the ram’s head and the female upper body, you can see its skeletal structure through the resin, and this symbolizes the presence of death in life. She has one arm reaching up, a symbol of teaching and pointing to the spiritual domain life, and the other outward with an open hand that represents welcoming and friendship. Her lower body is that of a crocodile, a prehistoric beast that has survived for centuries and countless environmental changes. The duality symbol here is that the crocodile lives in both the water and on the land; thus, it dwells equally in the light and in the darkness. This body that navigates land and water is also contrasted with the wings that take to the air, we see the same elements in ourselves – the parts of our imagination that soar in creating and the ones that lead us into darkness, like materialism and war.

On the side of the dead, we see a wolf skull and a male skeleton torso that is positioned backward, so we see its vertebrae and backside of the ribs. Reminiscent of Rodin’s The Thinker, this skeleton appears deep in thought, with his elbow resting on the knee, and the right hand positioned under the chin. His left hand is raised toward the sky, and he is holding a sacrificial knife. The top part of this knife is rounded to symbolize the sun or the moon, and the lower part represents the earth. But the meaning of sacrifice here is not so much about the killing and offering of humans to the gods, but rather the things we must give up on our path to enlightenment and wisdom. We also can see the backside of the crocodile takes on the appearance and texture of a serpent and its tail curls around the pile of sculpted skulls that comprise the base.

The sculpted skulls piled beneath the figures of life and death should not be understood as demonic or evil, rather completely the opposite. These generated skulls are inspired by many different eras, places, and various ages, cultures, and races, and they are treated like jewelry, their appearance is that of precious stones. These are the skulls of the dead philosophers, and they represent knowledge of the past and rendering them as a beautiful treasure symbolizes the valuable, timeless wisdom each contains. Once again we see duality at work and the cycle of life and death: the knowledge they gained in life remains living long after they physically die, and it informs those alive who seek to understand it. The most powerful teachings we can learn often come from those long dead. They’re beautiful relics of knowledge, and they come without the need to rob a grave.
We see on the base below the figures the Latin words “Dominus,” “Mulier," and “Dualitas” which translate roughly to Lord and Lady of Duality.

THE LORD & LADY OF DUALITY - THE PROCESS