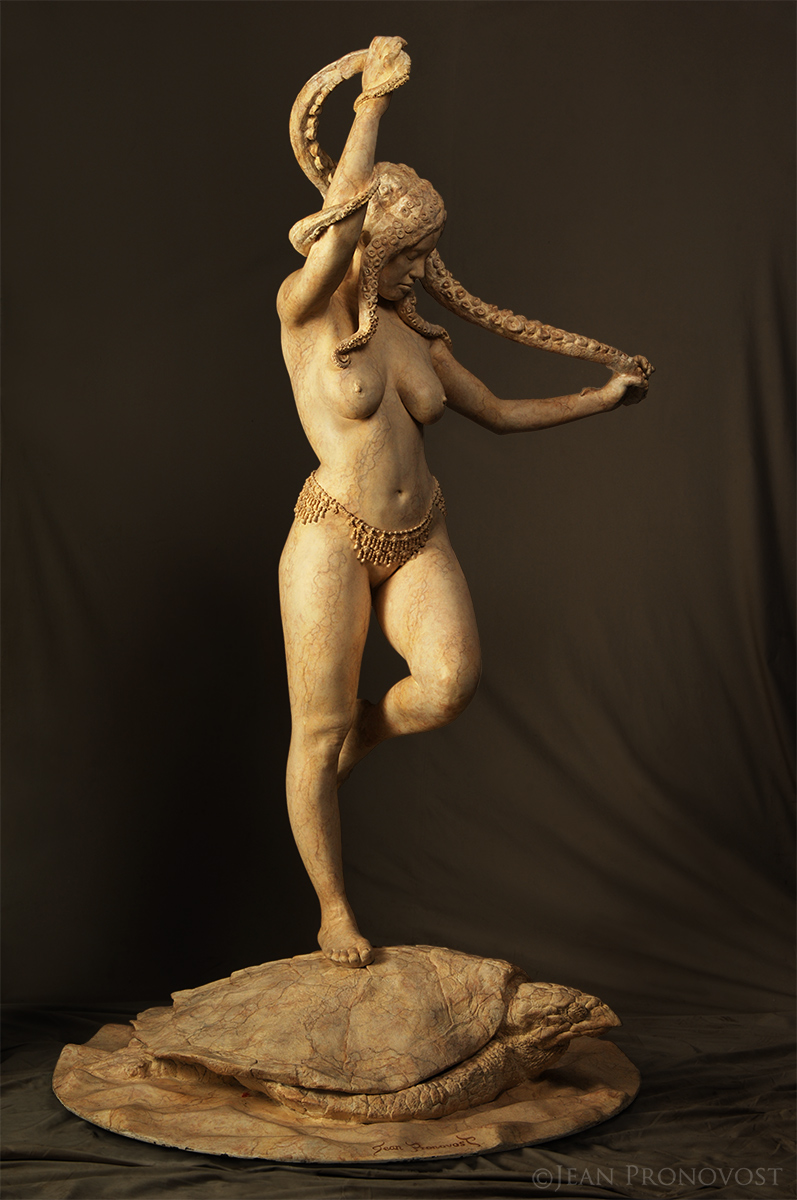 Bride of the Cosmophore - Edition 2 by jean pronovost

This sculpture just inspires dancing and feelings of frivolity. This beautiful woman beckons you to join her, she’s calling you to the party, but that turtle she’s on top of has a look on his face that says the contrary.  So, which do you listen to?

This beautiful free-spirited woman playfully dancing on top of a turtle’s shell is not all fun and games. The turtle is an old symbol, seen in ancient Greece, reflected in their temple architecture and on their coins, and in ancient Rome as a symbol for fertility, and by the Mayans and other native cultures, representing the earth. For the latter, the earth we inhabit is actually a giant prehistoric turtle that is swimming in primordial water.

The bride dances about on the back of the turtle in her ancient, fancy jeweled belt without any care or respect, and with her eyes closed. She is blind to what is really going on, a willful ignorance so she can keep having fun. She is an allegory warning us about the dangers of narcissism, ignorance and vanity. The bride is playing with an octopus, stretching it about and over her head.  The octopus is a symbol of nature, cleverness, and knowledge, as well as it is an intelligent predator: old legends spoke of giant octopus that would attack boats and if caught would attack people and pull out their eyes. It is also regarded as a creature that cannot be manipulated and yet she is bending it to her will and without thinking of the consequences or its own nature.  She lacks conscience in every way for the natural world, she is ignorant and makes herself blind to what her actions cause. The bride symbolizes our current attitude towards Mother earth and our failure to care about how our actions harm her. We would rather be distracted by celebrities and mimic their shallow aesthetics than to see the reality of the world we live in and how our excess is killing it. The bride tells us that the carefree moments will not last forever, the turtle will move dumping her off into the water and the octopus will gouge out her eyes. One can’t dance freely for long while the world burns, especially when nobody is watching.

BRIDE OF THE COSMOPHORE - Edition 2 - THE PROCESS